A Trip Through the Sixties – The Sexual Revolution

When you coordinate and liberate and release the sexuality and the minds of youth, and can twist it and change it toward a different goal and direction, via rock ‘n roll, via fucking in the streets, via dope, via action, direct action … then you can maybe push this country and we can rewrite the whole structure, based on the kind of energy released by rock ‘n roll.
– Ed Sanders

The concept of Free Love as expressed by hippies, didn’t just appear overnight. It’s a philosophy with roots deep in human consciousness. It just needs a little encouragement to surface. And that encouragement appeared in the 1960s in the form of new knowledge about human sexuality, the pill, psychedelic drugs, and a counter-culture which rejected the conservative ways and embraced individual freedom.

The only unnatural sexual act is that which you cannot perform.

– Alfred Kinsey
A new awareness of human sexuality began to spread among Americans starting with the Kinsey Report in 1948. It was a nine year study of human sexuality which opened everyone’s minds to the diversity of sexual behavior. One question in the survey asked whether the person was gay, bi or straight. The results indicating that up to 10% of the entire population is gay, was astonishing at the time. That one stat suddenly put homosexuality into a whole new light for many people. Another stat from the study that blew people away was the fact that nearly everyone masturbates. At last it seems, social science shed new light on sexuality, a once mystifying and taboo subject.

Then in the late ’50s, Masters & Johnson did a series of clinical studies of Human Sexual Response in laboratory settings that explored our physiological functions in every fascinating detail. Their report likewise became a best-seller and people everywhere were now discussing such once forbidden topics as vaginal orgasms and pre-come.

These two studies set the backdrop for a new generation to explore their sexuality in a free and uninhibited way. Beat poets and writers like Allen Ginsberg, Jack Kerouac and William S. Burroughs wrote popular books that embraced sensuality and sexual experimentation as an essential ingredient to living life to its fullest. Rock ‘n Roll music likewise began to express the adolescent yearnings and forbidden desires that were previously repressed.

Yet it took America with its conservative, Puritan roots awhile to catch on to this new awareness and freedom as we were programmed at an early age to regard sex and marriage as a sacred pair, not to be separated. But the baby boomers, raised with the more liberal philosophy taught in Dr. Benjamin Spock’s Baby and Child Care (a phenomenal best seller), were allowed more freedom to explore sex, even as children. Suddenly it was considered normal for children to experiment with sex (with other children of course).

The ’60s are gone, dope will never be as cheap, sex never as free, and the rock and roll never as great.
– Abbie Hoffman
So the whole generation growing up in the 1960s, developed a radically different attitude toward sex than their parents. Drugs like marijuana, alcohol, LSD and cocaine loosened inhibitions and sex became just another turn-on. Gay men and women started coming out of the closet in the cities. 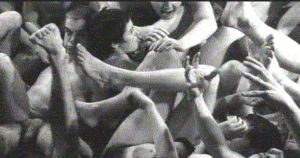 If it feels good…do it!
– unknown
Communal living situations fostered short-lived relationships, and much sexual experimentation. Groups like the Sexual Freedom League popped up, advertising their ongoing orgiastic events. Even the taboo against sex in public was forgotten. In parks, at festivals, in fact almost any hippie gathering was often the occasion for newly formed couples to get it on, often in public view. Free love meant you could love anyone, anywhere, anytime, without guilt.

But the biggest single event to liberate women from their designated roles as housewife and mother, was the contraceptive pill. This along with the popularization of other forms of birth control, like the IUD and spermicidal creams, allowed women to have sex, without concern about unintended consquences.

Around 1965, fashion went crazy, with a slew of new styles that emphasized women’s sexuality. The mini-skirt took the world by storm, revealing leg, thigh and sometimes more. Plunging necklines, see-thru tops and the rejection of the bra, gave men much more to drool over. Women at last had the power to manifest their latent femininity and sexuality.

Twiggy, set the fashion world on its head by making an icon out of a thin, boyish stick of a girl. Her sexual ambiguity and slim figure revolutionized the way women are portrayed in the media, and the way they look at themselves, and is still an essential part of the fashion scene today.

to continue the Trip

Posted in A Trip Thru The Sixties