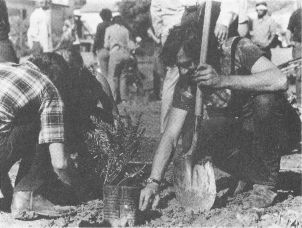 These National Guardsmen are not pigs. They’re not even gung-ho soldiers.

Most of them share our view that the Vietnam war is an unworthy act of aggression. By joining the guard they avoided two years of active duty and a tour in Vietnam.

As 6-monthers, they have scorn for the Regular Army volunteers and the officers and career non-commissioned officers who harass them back at the armory. They know that the men who give the orders are only in the Guard for the pension, or because they love the once-a-week exercise of power.

Sooner or later many of these guardsmen will realize that their six month deal was an impossible compromise. Talk to them and explain what we are fighting for.

Many of them will choose the Movement over the Military.

TO OUR COUSINS IN THE ARMY

Once again, Reagan and Heyns have decided to make Berkeley an occupied area. With teargas and shotguns they are attempting to deny the legitimate right of this community to determine the use of its own land. The same people who wanted to use you in Vietnam have now ordered you into Berkeley. You said No then, can you say less now?

You are under orders to occupy this community against your will. You know that the people you face are not the enemies of America. They are young people much like you, people who are struggling to make this country a decent place to live, work and love.

You joined the National Guard because you were decent enough not to want to kill innocent people in Vietnam. You hoped to serve your six months and return to your own lives and homes. Now you’re being called upon to perform the dirtiest work a soldier can do: fight his own countrymen!

What can you do?

2. Talk to us about the Park. Let us explain what we are fighting for.

You too are angry at the powerful people who rule this country. You too feel real concern over the future of America.

You know how to resist the army better than we. Our beef is with the Regents and the cops. We don’t want to fight you. If you are called upon to fight us, don’t fight hard.