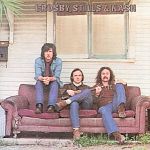 When talking about the hippie scene from the 1960s, especially the music scene, one groups that gets brought up of course is Crosby, Stills & Nash (later with Neil Young). They were definately one of the big icons of that scene, and their self-entitled debut proves that. It’s too bad that out of control egos, and out of control drug abuse (especially from David Crosby) nearly destroyed the band. If they band simply stuck to smoking a few joints or taking a hit from the bong, instead of later turning to cocaine, they probably would have gave us many more albums (instead of many albums from Crosby, Stills, Nash, or Young, or combinations of such). As everyone knows, David Crosby came from The Byrds, Stephen Stills came from Buffalo Springfield (he even tried auditioning for The Monkees, but luckily, was turned down), and Graham Nash came from The Hollies. CSN(Y) was very well known for their laid back, acoustic style with three part (or four part, when Young jumped on board) vocal harmonies that had a big impact on everything from various singer/songwriters, folk rock bands, and even prog rock bands (I’m pretty sure Yes wouldn’t sound like they do if it wasn’t for CSNY). This debut is full of great songs you probably know by heart, like “Suite: Judy Blue Eyes”, “Marrakesh Express”, “Wooden Ships”, and “Guinnevere”. Jefferson Airplane did a version of “Wooden Ships” off their album Volunteers, but I always felt the original was the best. Stills’ “Suite: Judy Blue Eyes” was dedicated to Judy Collins, who I believe Stills was dating her, if I’m not mistakened. The two Nash recordings, “Marrakesh Express” and “Lady of the Island” was originally intended to be recorded with his old band The Hollies, but since that band would rather record an album of nothing but Bob Dylan songs at that time, Nash got pissed off, and left for CSN. This album truly gives me great memories of my childhood (even though I was born in 1972 and wasn’t around in the 1960s). This was what I was exposed to long before I started finding out all these obscure albums that I currently review here. It’s little wonder why these guys ended up at Woodstock. It’s a no-brainer, if you’re a fan of music from the original Woodstock, this album is a total must.