The Dutch Experience by Nol van Schaik by: Skip

The Dutch Experience
The inside story: 30 years of hash and grass coffeeshops
By Nol van Schaik 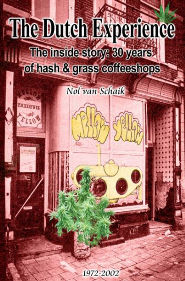 With this compelling book, Nol van Schaik, has done what no one else dared; expose the inside workings of the Dutch Coffeeshop system. In doing so, he reveals the truth about the Dutch cannabis trade, how it came to be and why it’s so successful. He also challenges the authorities in every country that oppress their cannabis users to come up with a more humane and tolerant way to deal with these controversial issues.

Coffeeshops are far from being a menace to society. Quite the opposite is true, and Nol goes to great lengths to explain why and support it with statistics. These stats show that the Netherlands has far less of a drug problem than other western countries thanks to coffeeshops supplying cannabis and by keeping those who use it away from hard drug dealers. It’s a system that works! By laying bare the history and deal making that went on to arrive at Holland’s current system, this book shows how it was done to everyone’s mutual benefit.

Yet the world is just beginning to acknowledge the success of the Dutch experiment with coffeeshops. Nol feels the Dutch system should be a model that other countries can follow, one that would make the insane War on Drugs obsolete. He’s so convinced of this, he even opened a coffeeshop in England to prove it. I myself am a member at that coffeeshop, which has since been closed thanks to the unrelenting anti-drug policies of the UK.

Another important issue covered in Nol’s book is the availability of marijuana for medical use. He points out that thousands of people need the medicinal benefit of cannabis but are denied access by their governments, forcing them to score their medicine on the street from hard drug dealers. Nol has taken great pains to provide low cost cannabis as part of the Netherlands Mediwiet system, which he has helped in many ways. This medical necessity should not be withheld from those in dire need, yet governments continue to act in an intolerant and inhumane way, causing undue suffering of ill citizens.

The Dutch Experience answers so many questions I’ve had for years about the Dutch coffeeshop system, that at last I’ve come to understand how it works from grower to backdoor to user. I can’t thank Nol enough for shedding light on this very controversial subject. He reviews the history of cannabis use and the rise of coffeeshops in Holland, and focuses on the on the activities of some notable individuals like Kees Hoekert, Robert Jasper Grootveld and Wernard Bruining. Thanks to the groundbreaking actions of the Provos and the resulting liberal attitudes in Holland, these cannabis activists were able to grow and market marijuana successfully.

These cannabis pioneers showed the authorities that cannabis use was not a threat to the social order; that it was actually a safer alternative to other socially accepted drugs like alcohol. Of course there were many confrontations with the authorities, but all were resolved with typical Dutch common sense. Nol reviews these incidents and explains exactly how cannabis came to be an accepted part of Dutch society; instead of the menace it is perceived as being in other countries.

With the opening of the first cannabis selling teashop, the Mellow Yellow, a precedent was set, allowing more shops to open. As the Dutch gained experience and sophistication, the system gained wider acceptance and flourished thanks to the entrepreneurial spirit of the coffeeshop owners.

I loved reading about who sold what to whom, when and for how much! Thanks to recollections from insiders like Wernard Bruining, the trip from grower to middleman to coffeeshop to stoned-out consumer is an enlightening one. It seems the demand for cannabis is always greater than the ability of growers and coffeeshops to supply it.

The antics of the police trying to raid and shutdown coffeeshops read like a script from the Keystone Cops. They were outwitted and eventually outlasted by the coffeeshop owners and activists who knew that cannabis was here to stay. By providing a safe place to purchase and use cannabis, they removed it from the street dealers and integrated it into Dutch society.

Eventually the government learned how to deal with these businesses, but the continual pressure from other governments to impose their drug war on Holland created a difficult situation. The laws are still in a constant state of flux as one country after another applies pressure on Dutch politicians to crack down on their cannabis dealing coffeeshops. But with people like Nol van Schaik around, I have no doubt that cannabis will continue to flow freely in the Netherlands.

This book is must reading for anyone interested in cannabis activism and those who might be considering opening a Dutch-style coffeeshop in their area. For others it is a joy to read and learn the history of the coffeeshop system in the Netherlands, and that there are other, far more tolerant approaches to soft drugs that work.

Nol van Schaik is the owner of three successful coffeeshops and the Global Hemp Museum in Haarlem, The Netherlands. He opened the Dutch Experience coffeeshop in Stockport, England with Colin Davies, who is now serving a sentence in a UK prison as a result. Nol is an outspoken activist for the freedom to use cannabis, especially for medicinal purposes.