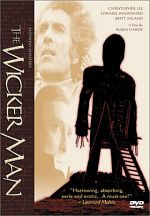 The Wicker Man was a movie I took a chance on. I never saw it before. I just saw a review on a Pagan-oriented web site (which doesn’t seem to exist any more) that reviewed books and movies with Pagan and Wiccan themes. Unsurprisingly, many of the films reviewed there only received luke warm to unfavorable reviews, because most of it was sensationalized Hollywood crap, to put it mildly, making Pagans out like they’re evil and Satan worshippers. It doesn’t give a positive image to real life Wiccans, witches, and Pagans, who are nothing like how Hollywood portrays them, but wonderful, caring, and tolerant people who wish harm on no one.

But the one film on that web site that gave the best reviews was Robin Hardy’s The Wicker Man, from 1973. Starring Edward Woodward as Sgt. Neal Howie, and Christopher Lee as Lord Summerisle. The movie involves an island off the Scottish mainland called Summerisle, in which the inhabitants practice old, pre-Christian pagan beliefs, although it’s set in modern times.

A police sergeant, Neal Howie was called from the Scottish mainland to Summerisle in search of a missing girl. Sgt. Howie is a devout Christian, and is put in the shock of his lifetime when he finds out the inhabitants are practicing the old Celtic pagan beliefs that seem to go contradictory to his puritan Christian beliefs.

People dancing naked, phallic symbols, various fire and fertility rituals are found throughout the movie, and I get a kick off Sgt. Howie’s reaction when he sees such things, he seems to get even more grouchy and uptight as the film progresses, it’s hilarious (although unintentionally). As he searches for the missing girl, he asks the islanders questions about the girl, but they act like they don’t know anything about it.

Of course, at the end, the islanders wanted to use Sgt. Howie as a sacrificial victim, because their previous year’s crops failed, so by sacrificing Sgt. Neal Howie (who was what the islanders needed: an adult male virgin) in a giant wicker man effigy, they claimed that they will get a bountiful harvest in the following months.

It’s pretty obvious that this film doesn’t put paganism in an entirely favorable light, but it doesn’t put Christianity in a favorable light either. And if you do research, you’ll find out real life Pagans, witches, and Wiccans are wonderful, caring, and tolerant people who don’t believe in sacrificing living animals (because it goes against their belief, which is “If it harms none, do what you will”). They believe if you do harm, it will come back to you three fold. So that’s how real life pagans differ from the movie The Wicker Man.

Now back to the movie. A lot of the music is modern folk music. One of the songs featured is a modernized version of Robert Burns’ “Corn Rigs”, sung by an American, Paul Giovanni, in which this version ends up sounding like John Denver. There tends to be a lot of singing in the movie, which threatens to turn it in to a musical. For example, the one scene where Willow MacGregor (played by Swede Britt Ekland, one-time girlfriend of Rod Stewart) is singing a song while naked seducing Sgt. Howie, same for a group of young women singing a fertility rite that goes: “Keep the flame inside you/Burn and burn below/fire seed and fire feed and makes the baby grow”. One of my favorite songs is the “Maypole Song”, which involves the scene of a Maypole dance.

This movie has been butchered when it came out in the theaters, so there’s like three different versions of the movie, the original theatrical release is 88 minutes long, and I believe the longest version (on videotape and DVD) is 111 minutes long. There’s been talks of a remake of The Wicker Man, this time set in America and starring Nicholas Cage. I am not entirely certain I’d want to see that version if it ever comes out, I’m happy with the original, and I’m not the only one who thinks that; Christopher Lee, one of the actors on the original film, doesn’t take too kindly to the remake either. Regardless, if you’re looking for a different kind of film that depicts the old, pre-Christian pagan lifestyle set in modern times, try this film.
Year of release: 1973
– Directed by: Robin Hardy
– Screenplay by: Anthony Shaffer
– Produced by: Peter Snell
– Starring: Edward Woodward (Sgt. Neal Howie), Christopher Lee (Lord Summerisle), Britt Ekland (Willow MacGregor), Diane Cilentro (Miss Rose, the teacher), Ingrid Pitt (the librarian)
Availability:
VHS, DVD, in varying lengths from 88 to 111 minutes.