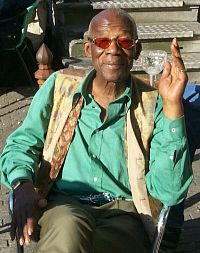 No one believes Amsterdam
Will ever stop swinging when
So much real freedom is truly
Felt, especially in the smoking
Coffeeshops where tensions and
Hostilities melt and
WWWHHHOOOoooeee!
What a beautiful scene

Amsterdam has always been a refuge for those whose politically incorrect ideas have exiled them from their home country. A few of these include Rene Descartes, Voltaire and Karl Marx. Today, Amsterdam is awash with a new wave of ex-patriat artists and writers seeking literary and creative freedom in the aftermath of 9/11. The scene here is reminiscent of Paris in the 50’s when Hemingway and Gertrude Stein held court in cafes and private salons.

Today’s refugees seek solace and fellowship in Amsterdam’s numerous brown pubs and smoke filled coffeeshops, where Alice B. Toklas would’ve felt at home. So it was no surprise when I finally met Lee Bridges, a man whose life and art revolves around such establishments, at the Greenhouse Coffeeshop. Here I found a soul brother. A man who feels the inspiration and creative energy permeating Amsterdam’s more famous cannabis hangouts. Lee, dubbed the Cannabis Poet by those who recognize his unique contribution to both poetry and cannabis activism, is quite a character.

On the Amsterdam scene since the early ’60s, Lee bridges the gap between the last great wave of writers, philosophers and artists with the new wave, recently arrived. At age 74, he is well respected by much of this younger generation.

Born in Georgia, Lee took off to the big city, New York, in the 1940s, as soon as he could, to dig the scene happening there in those Post WWII days. He hungout in jazz venues occasionally playing sax & clarinet in jam sessions around Harlem. Later, Lee traveled around with a big carnival band.

Lee went to night school to study English & creative writing. He found himself broke in Amsterdam in 1963, so he started doing poetry readings in the cafes. Later, in Paris, he formed a group called Contacts which combined Lee’s poetry with background music and a folksinger who sang during the breaks.

Lee loves to talk story and will tell you about his vagabond youth and his drug smuggling days back in the 70s, with tales from India, Pakistan and Afghanistan that harken back to the golden age of hashish dens along the famous hippie trail. Lee has been caught smuggling hashish into Europe and spent time in a French jail as a result.

With those days far behind him, he can now recall them without fear or worry that he might get into trouble. He’s a man who’s paid his dues, and now demands respect and tolerance. And living in Amsterdam, surrounded by friends he gets plenty!

Lee is an elderstatesman among the cannabis set. His 55 years of cannabis consumption haven’t dulled his wit nor his sense of humor at all. In fact, his regular use of the substance keeps him focused on the beauty of the moment. Like a skinny, black buddha, Lee’s presence has a subtle influence on those around him. His beautiful resonant voice draws you in then whisks you away on an exotic, mesmerizing journey.

His stories easily capture the imagination of the stoned, while his poetry reaches into every soul’s sense of wonderment and revelation. Lee is fond of saying WWWHHHOOOoooeee!, which pretty much sums up his perceptions of life’s dark alleyways as well as it’s breathtaking beauty.

Like Allen Ginsberg (his contemporary in NYC), Lee Bridges sees life as a stark reality of desire and despair occasionally mitigated by peace and contentment. Yet, like Buddha, he knows it’s all in your head.

In fact
I don’t even want
To stop hanging out
Looking out for new
Smoke and, new folk
And, just plain old
Having fun, because
Every day you wake
Up, means that every
Day is won

A Sure Thing
Copyright 2000 by Lee Bridges

His outspoken opinions on cannabis use, as a social and spiritual phenomenon, makes him an activist if not an outright promoter of the plant. Lee sees cannabis as a bridge to finding your true self, and as a non-aggressive alternative to alcohol consumption. His strongly held convictions are echoed in his poetry.

And you might be wondering if
You are, in fact, smoking enough

His Amsterdam poetry is evocative, yet gritty. Lee plays with the city’s urban contrasts like sinful pleasures and junkie despair. Yet his love of the city and it’s people comes blazing through the wet and gray.

The ladies of love reposing in
Rose hued windows of innumerable
Quickie retreats of pleasure and
A mere stroll thru the good time
District is a real treat, altho
Many find it too offbeat, saying
There’re too many whores, too
Much drinking, too much smoking
Of cannabis, in fact, far too
Much of everything for a normal
Soul to endure

The Cannabis Poet is that rare combination of artist, activist, humanitarian and philosopher who finds inspiration and beauty even in life’s darkest corners.